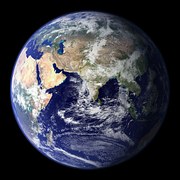 We probably all have heard that our thoughts and beliefs are energy and create what makes up our world. Considering this and all the news about global warming, I am tempted to get a bit worried.

Even though the whole issue about global warning and the destruction of Earth might be a bit more complex than just down to a few scientists fearing it, and by now having convinced just about everybody else of it, I would think that all the energy created by billions of humans fearing global warming and other catastrophes, cannot really help.

Luckily I am a hopeless optimist, and believe that creation loves us, wants us to be happy, not drown in melting icecaps, and that everything can be healed. Therefore I had this little idea whilst riding on my bicycle today, which will hopefully have big results. Even though many of the readers here may already be sending healing and peace to the world, it might be an idea to pool our healing. Let's say every Tuesday night at 10pm, if possible, we take 10 minutes, wherever we are, and send distant healing, prayers or light to our planet with all its inhabitants and the climate.

So, even if our neighbours don't use energy saving light bulbs, some country somewhere refuses to control their emissions, or some scientists say that whatever we do we'll still be doomed, let's try to remember the awesome power of healing, love and light and trust that our positive thoughts and deeds are stronger.

Above idea is supported by several anecdotes I read and heard about about the power of combined payer. More scientifically it is supported by e.g. a study conducted in 1993 in Washington, D.C. where 4000 people came together for a 2 months period to conduct an experiment into the effect of regular TM Meditation (Transcendental Meditation) on the levels of serious crime in Washington D.C. As predicted through several smaller studies beforehand a reduction of up to 25% was reported.

The more take part the greater might be the effect, so if you have found and read this - think about taking part and sending this on. You do not have to be experienced in meditation or a   healer, it is the intend that counts. So even if you just sit down, become as quiet as possible in your mind (if it is hard for you to quiet your mind, you can try visualizing the planet surrounded by healing green, silver, violet or golden light) , and dedicate these 10 minutes to the cause, it will have an effect. Try to make the Tuesday 10pm time, but even if you cannot make this for some reason, it is perfectly o.k. to do it at another time. Spirit, they say, is above space and time, and your good intentions will find their way in Space and Time.

Furthermore I'd recommend to keep an open mind during sending healing etc., try to keep free of willing specific events ones might think imperative to the issue. Just keep a clear intend that it should be for earth the climate and everything connected with the issue. Trust the energy will go where it is needed most, be that development of new technologies, sunspots or the settling of political intrigues.

I have also set up following Facebook Group, which you are very welcome to join and recommend onwards: Invite-Ultimate-Good-helpers-to-save-the-climate